“Hi! We’re home!” We’ve returned from an early New Year’s Eve at the Draughthause, our favorite bar that serves free bratwurst and knockwursts on Saturday afternoons. We had a couple of delicious beers and brought a growler for our evening, since we don’t go out on NYE.
THWACK! THWACK! THWACK!

The sound of something being hit repeatedly is the first thing we hear. It’s Penny Pie, hitting her plastic crate walls with a powerful, happy tail. We’ve been gone a few hours and she’s so happy to see us you might have thought we’d been gone for months. Ian lets her out and there is a mad, gleeful dash around our legs, through the apartment, and around our legs again. Then it’s back in the crate to rescue the Kong, which she clutches in her jaws on her next fifteen laps through the living room. Her body wriggles and thrashes, in her joy. 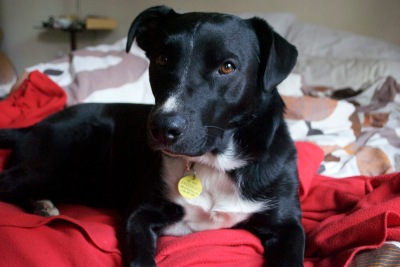 We’ve had her for three days and already she loves us so much it’s hard to look in her eyes. She is so smart that she’s mastered standing, kisses, early stages of “find it” and the agility ramp at the dog park.
She’s friendly with the other dogs but happy to be on her own. When they are running as a pack, chasing the designated “it” she might join in, but she might just explore an uncharted corner. She runs with them when she wants, but when they catch the dog playing rabbit and engage in play fights she circles around, smiling but not engaging. She runs back to check in with us, asking “is everything cool?” with her easygoing smile, and curious eyes. When another dog is introduced she keeps close to us to stay safe and calm. She speeds around with the fast dogs, enjoying the speed in those muscular legs, powerful and fluid, excited to meet other dogs and play doggy games.

When she’s happy, her ears perk up, she smiles at us, and looks ready for any adventure.
When we go on walks it’s like we’ve leashed you, Julia. This dog has places to go! and I am not walking fast enough to get her there on time. I adore seeing her prance along, ears cocked, ready to chase another unfortunate squirrel. She hasn’t caught one, but it’s not for lack of trying (it’s because I won’t let her off the leash). She stands straight up in her effort to strain against the impending leash. Her legs scramble to get good footing so she can dash to the tree, and she’d probably climb it too.