I know, that title conjures up images of broken toys, limping along on limbs that are uneven lengths, busted seams on sewn items, or macaroni glued to paper plates given to parents trying to hide their smiles in hopes of looking grateful. Or it makes you think of a log cabin where everything is covered in the frilly green and red of some old time-y daydream gone horribly awry, a look only mastered by Martha Stewart’s captive Christmas elves.

I didn’t want to go crazy with the holiday inspired decor this year for a few reasons.
1) We’re poor.
2) We aren’t huge on Christmas to begin with (it being essentially a religious/commercial one and we’re not religious or big on debt), and since no family is nearby it’s going to be a quiet one anyway.
3) We don’t have kids.

But, I did want to do something because we are neither the Grinch nor Scrooge, and I do like the ideas of peace on earth, goodwill toward man. If only it weren’t for one month or day, and actually happened.

Last year, our first year living together, I decorated our table while Ian was at work.
And it looked a little something like this:

He really liked it, and loved coming home to the surprise. So I kept the tradition going this year. When he got home from work this is what greeted him:

I had sewn the stockings beforehand, and spent about a week of TV nights embroidering our names on them, so that was no surprise, but the decorated mantle was. I finished the stockings up that morning for the big reveal. 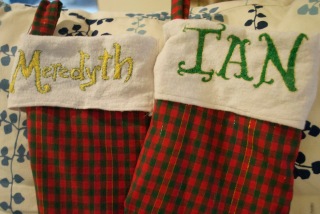 I also spent about a month making something (I’m still really new at sewing and make a LOT of mistakes) for my niece, Paige. She’ll be one in February and every girl loves a doll. Here’s a gratuitous photo:
Ian predicted it would be torn apart limb from limb in a week, but I don’t care. It’s too adorable. 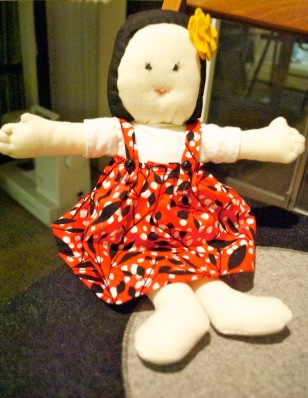 One doll, three dresses. Her hair is in a bob, like Jackie’s (her mom) and she wears a flower, just like Paige. And I also made a little carrying case that could double as a purse, if her mom feels like using it for herself instead.